Learn more about the diagnosis and treatment of Warts at Saguaro Dermatology located in Phoenix. 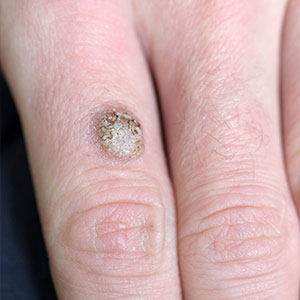 Warts are rough, noncancerous growths of skin that appear as thick pads or bumps, most commonly on fingers, hands or feet. While generally harmless, warts can cause discomfort, irritation, and pain. Moreover, they frequently reoccur, and they may be hard to completely eliminate.

Common in both adults and children, warts are caused by an infection from the human papilloma virus (HPV), of which there are over 100 types. The virus likely infects the skin through cuts, scrapes, or other minimal injuries (1). When the HPV virus infects the skin, it causes the skin cells to multiply. This cell proliferation results in a thickening of the outer layer of the skin, which builds up into a rough, bumpy wart. The development of the wart takes time, however. Once the virus invades your skin, it is often not detectable by your body’s natural defenses. It may take up to 12 months for the wart to appear (2).

Certain environments contribute to the risk of being infected by the HPV virus and, thus, of developing warts. For example, warts on the feet can be acquired from walking barefoot in areas where other people walk barefoot. Moreover, because the HPV virus can exist on the surfaces of things, places such as showers and swimming pools with non-slip, abrasive floors can both harbor the virus and cause a scratch or other abrasion whereby it can enter the body (2). Indeed, one study of 146 adolescents found that 27% of those who used a communal shower room developed warts on their feet (1).

Can I Get Warts from Touching a Toad or Frog?

Although it is a common belief shared by many people, it’s a myth that handling a toad or frog can give you warts. As explained above, warts are caused by the HPV virus, which only humans carry. So while the appearance of these creatures may suggest warts, there is no connection. Neither can rubbing a toad on a wart help get rid of it, as an old folk tale describes. (2)

What are the Types of Warts?

The type of wart varies by where it is located on the body and what it looks like. There are five basic types of warts.

What is the Difference Between a Wart and a Mole?

Warts and moles are similar in that, like warts, moles are overgrowths of cells that appear on many parts of the body. Moles are often congenital or caused by repeated and prolonged exposure to the sun, not by a virus, and they appear in a range of colors from pink or tan to brown, red, or black. Moles are generally less crusty or rough than warts. And while warts are harmless, some moles have a higher risk of developing into skin cancer.

Do Warts Go Away On Their Own?

Many (non-genital) warts resolve on their own but it may take months or years. Whether or not they go away without treatment depends on many factors, including the immune system of the person affected, age, the type of HPV responsible for the wart, and the site of the wart. One study of 1000 children found that two thirds of warts went away without treatment within a 2-year period (1).

What Treatments Are Used to Get Rid of Warts?

While many treatment options are available for warts, the therapy will be based on the type of wart being treated, the location of the wart, and other factors, such as cost, minimization of pain and scarring, and effects of treatment that may impact the patient’s lifestyle or occupation (2). Currently, there is no single therapy that provides painless wart elimination in one visit, and a combination of treatments may be recommended to achieve the best outcome. In any case, while all current treatments are effective to some extent, warts frequently return and require repeated treatment (3).

Common treatments for warts include the following:

Other at-home remedies may help as well, although their effectiveness in preventing the wart from coming back is unclear.

Of all these methods, one review concluded that topical salicylic acid increased the cure rate of warts compared with a placebo, with cryotherapy promising to be as effective as salicylic acid. However, there was not enough evidence from the studies under review to show whether duct tape occlusion, laser treatment, photodynamic therapy, or surgical methods increased cure rates compared to placebos (1).

Which Warts are Hardest to Treat?

In part because of their location, plantar warts and genital warts present a therapeutic challenge for both patients and clinicians. With plantar warts, debridement—scraping away of the affected tissue—is necessary to remove the hardened skin before treatment with a topical therapy (2). As for genital warts, treatment focuses on removal of the warty tissue, rather than eradication of the virus (3).

Warts are very contagious and can be passed to other parts of your body—or to another person—after touching them. In addition to increased risk through use of communal showers, warts can also be passed through shared use of a towel or personal item such as a razor.

We recognize that even apparently minor conditions such as a wart can cause significant discomfort and interfere with daily activities. Our dedicated team of  medical professionals can provide quick removal of common warts as well as treatment for painful warts, warts that do not respond to over-the-counter remedies, and warts that appear on the face, genitals, and other tender areas of the body. For wart removal in Phoenix and Mesa, call us today.

Of all these methods, one review concluded that topical salicylic acid increased the cure rate of warts compared with a placebo, with cryotherapy promising to be as effective as salicylic acid. However, there was not enough evidence from the studies under review to show whether duct tape occlusion, laser treatment, photodynamic therapy, or surgical methods increased cure rates compared to placebos (1). 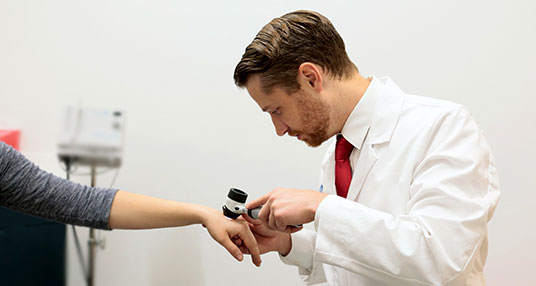